Making Grand Plans When Multiple Sclerosis Has Other Ideas

I’m not a freak show!

Some hefty weights, sitting by my bed, yesterday.

Back in the Noughties, I spent a happy three years or so working for the ‘leading premium health and fitness group’, or something like that. Fluffy marketing and pr-speak for David Lloyd Leisure. Thoroughly recommend: https://www.davidlloyd.co.uk/  .

It was very much a lifestyle job. If you had a morning meeting, you could bet your bottom dollar – and indeed any excess fat on your bottom – that you would run into other attendees prior to that meeting on a treadmill, or in the pool. Or dosing up on a Full English Breakfast as a reward for all the worthy calorie-crunching.

If the meeting was in the afternoon, the same exercise logic applied. But replace ‘Full English’ with ‘Pint of Beer and a packet of crisps’.

I wasn’t yet diagnosed with Multiple Sclerosis, but the ongoing clues I can remember:

– My fastest runs weren’t on the treadmill, they were to the loo. Bladder usually. Bowels occasionally. Charming.

– When I staggered off my bike after a spinning class I would be gripped by leg spasms and cramps for a couple of minutes. “My, that was a good session,” I said elatedly to myself, long after everyone else had sauntered off to the changing rooms.

– Every year I would complete a triathlon and every year the 10km run would see me repeatedly stumbling on my left foot as I neared the finish line. “Concentrate, you numpty,” said I. And soon afterwards I would fall flat on my face. A symptom called ‘Foot Drop’ was headed my way. 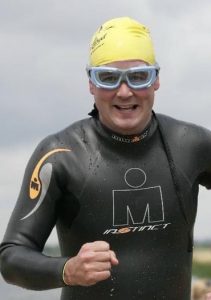 A triathlete and sex god, yesterday

Every January, thousands of bright-eyed and hopeful new members would be hammering at our doors. Complete with turkey and Sherry belly, and a shiny New Year’s Resolution to get fit and lose weight. Wisened existing members knew to steer clear of our clubs for a month. Or turned up anyway and complained about parking spaces and club etiquette.

February and March saw a hefty chunk of new members skulk back home defeated. Waves of enthusiasm were overwhelmed by a return to listless norms. Some of them even remembered to cancel their membership. And existing members, plus the odd new one who had held the course, star-jumped back in to reclaim ‘their’ club. And ‘their’ rather attractive tennis coach.

I learned there and then not to make hard and fast resolutions on January 1st. Statistically I was bound to fail, and the onset of Multiple Sclerosis only pushed me further in that direction. After all, how can I plan beyond tomorrow if I’m not sure exactly how exhausted I will be? Or what will hurt? Or if I’ll be having a bad MS day? Or ‘enjoying’ a new symptom? Or requesting another restraining order against Kate Winslet?

So here we go:

I’m already doing well on the healthy eating front. I’m doing ok on the exercise malarkey. I’ll do better once Lockdown lifts and Spring moves in. I’m already on a boozing ‘circuit breaker’ after inadvertently becoming a daily drinker in Lockdown one. Oops.

3. Kickstart my book-writing. I was flying four years ago, but my sister passed away. A part of me can’t quite move on from that, but it’s becoming a millstone and an excuse. 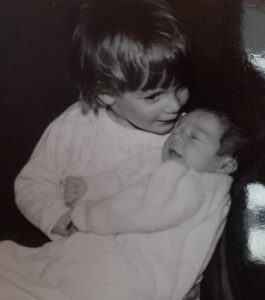 I wrote about Vicky here:

And I know she’ll be proud of me if I get my act together.

Here’s the draft Foreword section. No whizzy title yet. Please please gimme any feedback, good, bad or indifferent. I had written over 40,000 words. At least 20% of them are ok…

I was fine before they opened the plane door two miles up, honest.

It was 2013. I had willingly signed up for a charity tandem skydive and today was the day. We had taken off in bumpy-bouncy style from a field near Peterborough, England, which masqueraded as a ‘runway’. Up, up and away into a warm blue-ish sky, with just the odd decorative cloud and a hint of a breeze. I certainly felt the part with my (slightly shabby, standard issue, faded blue) jumpsuit, goggles and headgear. Perfect.

We were climbing steeply at two hundred miles an hour. You couldn’t wipe the grin off my face – while the door was closed, at least. I trusted Steve, the tall friendly chap buckled very tightly behind me, even though I’d met him only an hour before. After all, he had cheerfully confirmed, his main chute had only failed three times in 10,000 jumps.

But the gale and the roar that assaulted me as the two seasoned ‘jumpers’ in front of us casually slid open our exit route at the back of the plane was utterly overwhelming. I watched open-mouthed as just yards away from me, they nodded knowingly to each other, and simply vanished – voluntarily – out into the thin, raging air. My eyes were suddenly as wide as my goggles, my ears deafened and confused. “What the bloody hell are you doing here, you plonker?” was my over-riding thought for that panic-stricken, rabbit-in-plane-lights moment.

There was no going back now though. As we shuffled the short distance towards the door for our own ‘jump’ – more a controlled-by-the-other-guy tumble actually – the camera lady filming and photographing my whole experience with a headcam nonchalantly climbed out into that gale and waited. Hanging on to the outside of the plane. At two hundred miles per hour. As if that was a totally normal and sane thing for someone called Kate to do.

More ungainly crabbing forwards and I was perched on the very edge of noisy nothingness. We were looking out into a vivid blue expanse, clouds way below us, the horizon and the ground both just distant concepts. My legs were now dangling out of the plane. Buffeted. Battered. At two hundred miles per hour. Have I said that already?

I faked a smile to super-bonkers-woman’s camera, and mercifully quickly, Steve and I were off and falling. Or possibly cartwheeling? For a brief second or three – which seemed like hours – I had no idea of which way was up or down, and there was no chance I was going to breathe any time soon, so tightly were my teeth clenched. And were my eyes scrunched closed? Probably.

As we steadied and plummeted down – only at about 120 miles per hour, mind you – I felt a reassuring tap on my shoulders from my tandem buddy. That was his signal that all was fine and I could uncross my arms, find my bearings, and take in what was happening. 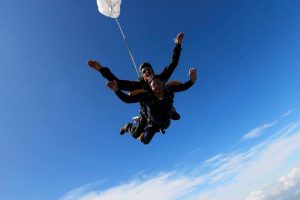 Right in front of me and descending parallel was super-bonkers-woman, snapping away and filming the whole surreal experience. In the few moments between the utter bewilderment at the plane door to now, I had hurtled seamlessly to a state of total exhilaration, and at some point even remembered to breathe.

I knew from the safety briefing that we would freefall for fifty seconds – nearly a mile – before Steve opened the parachute. Because you are so high up, terra firma is pretty much out of sight and definitely out of mind. It’s more like floating in an outrageously windy space than plunging groundwards. Adrenaline, sensory perception overload and total euphoria made that lung-bursting fifty seconds feel an awful lot longer in a glorious, slow-motion kind of way. I screamed, I did a little jig, I laughed, I giggled, I beamed. Such was the noise there was no way of communicating, but anyone within half a mile would have felt the glow of my sheer, unadulterated joy. Wow! Whee! Wahey! Wooh! We whooshed through a wisp of cloud, just to remind me of how fast we were travelling. Very… Yay!

I could have free-fallen all day if science and reality permitted, but all too soon I felt a huge tug (especially on my own ‘undercarriage’!) as the chute unfurled to plan, my safety harness kicked in, and we decelerated in an instant. Super-bonkers-woman had shot on down beneath us to film our landing, so we were left alone to serenely drift the last mile to earth. Silence and calm, a stark, very sudden contrast. Wow! Phew! Woohoo! Wow again!

My tandem skydive buddy and I could talk now, and for the first couple of minutes, I babbled like a two-year-old on an almighty sugar high. Steve took us for a couple of tight spins, then as we straightened, he pointed out landmarks and the field we were aiming for. He let me steer for a while. That was vaguely fun, but I was still taking in the enormity of the freefall and happy to hand back control after some weak turns.

Soon we could see matchbox cars and stickmen – one of the emerging dots was, I hoped, my wife – down in our target field and it was time to prepare for landing. The parachute guru strapped behind me did all the real work of course. My only task – other than to lap up every extraordinary second of the experience – was to lift my legs and hold them there. It was a bit of a kerfuffle, but we managed.

The ground was zooming towards us now, but not in a scary way. There indeed was my beautiful wife, there was my family. Clicking away and smiling too. Their cheeriness was probably more about relief. Mine shining back was about ecstasy and other-worldliness. Steve was a true pro, and with the breeze still faint, our landing felt about as risky as sitting down on a sofa. I slumped backwards on the grass, arms aloft. Glorious. Just glorious. Some quick unbuckling, a hoarse few interview words with bonkers-video-woman, and I was hauled to my feet. Tears were flowing.

I was mobbed. Massive, heartfelt hugs with my wife and other family members. By now I was sobbing, in a good way. A very good way. Someone had handed me my walking stick, but for the last half hour I had been utterly unaware of my disability. No pain, no immobility, no worries, no multiple sclerosis. Freedom! Normality. I had genuinely forgotten what that felt like, and I had had to fall out of a bloody plane to experience it. I hobbled to the van for the short ride back to base, with all the other seasoned ‘jumpers’. High fives, genuinely warm words of congratulations from lots of them. Nice lot, the parachuting community. My eyes are welling up and my heart is pumping even now from the memory.

I took days to fully digest what I had experienced, and months to come down from what, after all, was a two-mile high. I can still enjoy life. I can still do brilliant things. I just need to look harder and reach higher sometimes than Mr Average. And sometimes I need to ask my wife’s permission.

A film of another jump I did. Feel the joy! 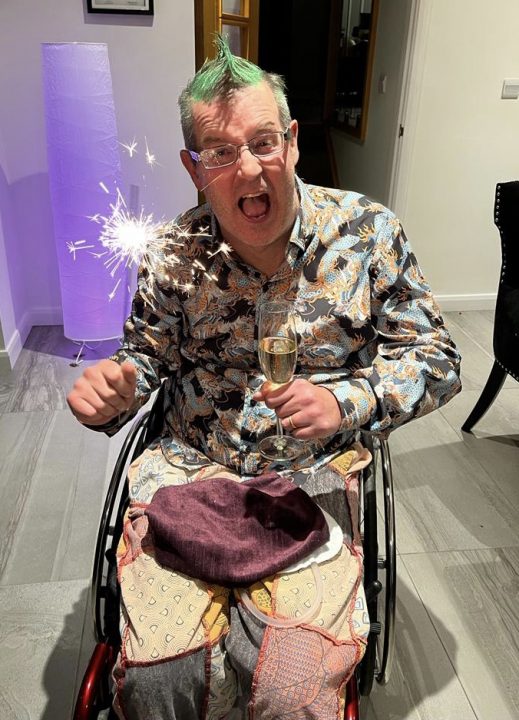