Why I do stupid things…

Volunteers to the South-West sir. Thousands of them!

A Glutton for Funishment 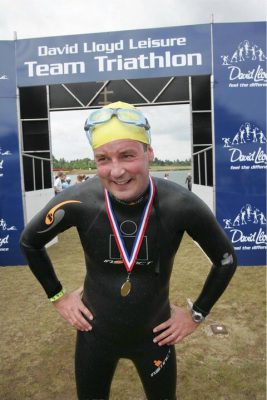 That title could take this blog so many directions!

Yes, Multiple Sclerosis makes me visibly disabled, tired, never far from a loo etc. It also affects my thinking. Cognitive Dysfunction they call it. The same faulty nerve signals affecting my legs (for example) directly impact my brain. I can’t process the world around me as fast as others. I can’t concentrate or focus for long. I forget things, especially short-term. I struggle to multi-task. [insert appropriate bloke joke]. On a bad MS day, I would certainly pass as stoopid. Nope, not talking about that today.

It’s a bugger, but my brain is also affected in other, subtler ways. (the long-suffering Mrs W would argue not so subtly). Because I am constantly malfunctioning a little grey matter-wise, I don’t quite operate as I should. I miss social cues. I struggle to remember faces, particularly in unfamiliar locations. I say inappropriate things. Basically my character is tinkered with. If I had some kind of 100-button control panel denoting my behaviour, I reckon a random three or four of them would be beeping orange at any time. Perhaps this explains my awful dad jokes. Probably not, but worth trying to blame it on MS.

Nope, neither am I talking about that.

This, you will be delighted to learn, is my chosen topic today: why, oh why have I signed up to do an ‘Urban Tough Mudder’ in two weeks time? For the uninitiated, this will be five kilometres of obstacles to climb over, under and through. A lovely get-fit challenge for the able-bodied, and people looking for a novel way to raise money. My friends and colleagues at https://upugo.com are teaming up to haul me through this, as I won’t be capable of completing a single obstacle on my own. Together we’re raising money for the fantastic folk at https://www.shift.ms 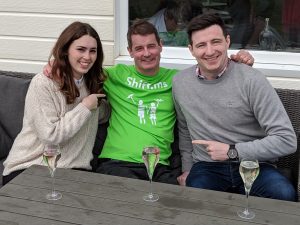 Lots of people with MS find other interests to keep them engaged with society, to keep their brains switched on, to stay fit, or positive, or sane… Well I do lots of that. Family adventures whenever I can, 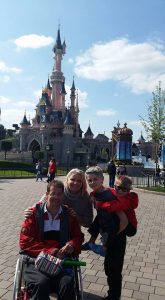 (four nights camping at CarFest coming up, bloody hell); food (yum!); public speaking when they let me get hold of a microphone; writing and social media (a little too much?); still working; reading; ogling my beautiful wife; hours of tantric sex… (sadly not the last one)

All of that is great. Adrenaline though, where’s that in the puzzle? I need it and I miss it. Here is the current foreword to my book. Very much in draft but I hope it explains Life, the Universe and Everything from my point of view… 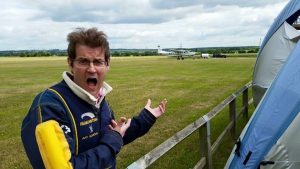 I was fine before they opened the plane door two miles up, honest.

It was 2013. I had willingly signed up for a charity tandem skydive and today was the day. We had taken off in bumpy-bouncy style from a field near Peterborough, England, which masqueraded as a ‘runway’. Up, up and away into a warm blue-ish sky, with just the odd decorative cloud and a hint of a breeze. I certainly felt the part with my (slightly shabby, standard issue, faded blue) jumpsuit, goggles and headgear. Perfect.

We were climbing steeply at two hundred miles an hour. You couldn’t wipe the smile off my face – while the door was closed, at least. I trusted Steve, the tall friendly chap buckled very tightly behind me, even though I’d met him only an hour before. After all, he had cheerfully confirmed, his main chute had only failed three times in 10,000 jumps.

But the gale and the roar that assaulted me as the two seasoned ‘jumpers’ in front of us casually slid open our exit route at the back of the plane was utterly overwhelming. I watched open-mouthed as just yards away from me, they nodded knowingly to each other, and simply vanished – voluntarily – out into the thin, raging air. My eyes were suddenly as wide as my goggles, my ears deafened and confused. “What the bloody hell are you doing here, you numpty?” was my over-riding thought for that panic-stricken, air-born rabbit-in-headlights moment.

There was no going back now though. As we shuffled the short distance towards the door for our own ‘jump’ – more a controlled-by-the-other-guy tumble actually – the camera lady filming and photographing my whole experience with a headcam nonchalantly climbed out into that gale and waited. Hanging on to the outside of the plane. At two hundred miles per hour. As if that was a totally normal and sane thing for someone called Kate to do.

More ungainly crabbing forwards and I was perched on the very edge of noisy nothingness. We were looking out into a vivid blue expanse, clouds way below us, the horizon and the ground both just distant concepts. My legs were now dangling out of the plane. Buffeted. Battered. At two hundred miles per hour. Have I said that already?

I faked a smile to super-bonkers-woman’s camera, and mercifully quickly, Steve and I were off and falling. Or possibly cartwheeling? For a brief second or three – which seemed like hours – I had no idea of which way was up or down, and there was no chance I was going to breathe any time soon, so tightly were my teeth clenched. And were my eyes scrunched closed? Probably.

As we steadied and plummeted down – only at about 120 miles per hour, mind you – I felt a reassuring tap on my shoulders from my tandem buddy. That was his signal that all was fine and I could uncross my arms, find my bearings, and take in what was happening.

Right in front of me and descending parallel was super-bonkers-woman, snapping away and filming the whole surreal experience. In the few moments between the utter bewilderment at the plane door to now, I had hurtled seamlessly to a state of total exhilaration, and at some point even remembered to breathe. 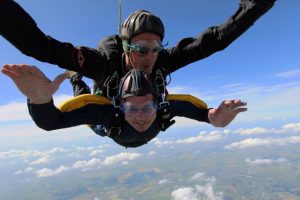 Tantric airborne sex. Or something.

I knew from the safety briefing that we would freefall for fifty seconds – nearly a mile – before Steve opened the parachute. Because you are so high up, terra firma is pretty much out of sight and definitely out of mind. It’s more like floating in an outrageously windy space than plunging groundwards. Adrenaline, sensory perception overload and total euphoria made that lung-bursting fifty seconds feel an awful lot longer in a glorious, slow-motion kind of way. I screamed, I did a little jig, I laughed, I giggled, I beamed. Such was the noise there was no way of communicating, but anyone within half a mile would have felt the glow of my sheer, unadulterated joy. Wow! Whee! Wahey! Wooh! We whooshed through a wisp of cloud, just to remind me of how fast we were travelling. Very… Yay!

I could have free-fallen all day if science and reality permitted, but all too soon I felt a huge tug (especially on my own ‘undercarriage’!) as the chute unfurled to plan, my safety harness kicked in, and we decelerated in an instant. Super-bonkers-woman had shot on down beneath us to film our landing, so we were left alone to serenely drift the last mile to earth. Silence and calm, a stark, very sudden contrast. Wow! Phew! Woohoo! Wow again!

My tandem skydive buddy and I could talk now, and for the first couple of minutes, I babbled like a two-year-old on an almighty sugar high. Steve took us for a couple of tight spins, then as we straightened, he pointed out landmarks and the field we were aiming for. He let me steer for a while. That was vaguely fun, but I was still taking in the enormity of the freefall and happy to hand back control after some weak turns.

Soon we could see matchbox cars and stickmen – one of the emerging dots was, I hoped, my wife – down in our target field and it was time to prepare for landing. The parachute guru strapped behind me did all the real work of course. My only task – other than to lap up every extraordinary second of the experience – was to lift my legs and hold them there. It was a bit of a kerfuffle, but we managed.

The ground was zooming towards us now, but not in a scary way. There indeed was my beautiful wife, there was my family. Clicking away and smiling too. Their cheeriness was probably more about relief. Mine shining back was about ecstasy and other-worldliness. Steve was a true pro , and with the breeze still faint, our landing felt about as risky as sitting down on a sofa. I slumped backwards on the grass, arms aloft. Glorious. Just glorious. Some quick unbuckling, a hoarse few interview words with bonkers-video-woman, and I was hauled to my feet. Tears were flowing.

I was mobbed. Massive, heartfelt hugs with my wife and other family members. By now I was sobbing, in a good way. A very good way. Someone had handed me my walking stick, but for the last half hour I had been utterly unaware of my disability. No pain, no immobility, no worries, no multiple sclerosis. Freedom! Normality. I had genuinely forgotten what that felt like, and I had had to fall out of a bloody plane to experience it. I hobbled to the van for the short ride back to base, with all the other seasoned ‘jumpers’. High fives, genuinely warm words of congratulations from lots of them. Nice lot, the parachuting community. My eyes are welling up and my heart is pumping even now from the memory.

I took days to fully digest what I had experienced, and months to come down from what, after all, was a two-mile high. I can still enjoy life. I can still do brilliant things. I just need to look harder and reach higher sometimes than Mr Average. And sometimes I need to ask my wife’s permission. 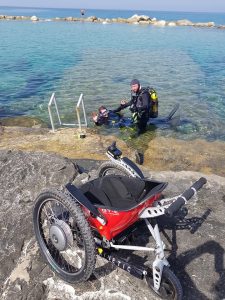 An adrenaline junkie being dragged around underwater in Cyprus