Wheelchair Rugby and Me

Glory, Despair and Coffee before 10 in the morning

Having carers… Giving in?

Training. Bash into everyone!

Once upon a time, in what feels like a galaxy far, far away, I swanned around as a healthy and fit rugby captain, head boy and general fancy pants. All that mattered in life at the weekend was rugby, girls and beer. In assorted order depending on the time of day. And I only fell over because I was tackled or on my fifth pint. Not, as is now the case, because of a progressive illness attacking my central nervous system.

Fast forward on my storyline and after a gap of some thirty years I am, at last playing a contact sport again. Wheelchair Rugby. Still known in some countries by its original name, MurderBall (!). And it’s bloody marvellous.

I ‘discovered’ Wheelchair Rugby about three months ago. And I say ‘discovered’ like that because my weekly physio guru had been nagging me for six months beforehand to give it a go. It took me that long to find sufficient oomph and mojo. But since that first tentative roll, crash ‘n bash I’ve only had one Sunday off. And that’s only because we all took a break for Easter. I’d have played even then if I could, chocolate and bunnies and all… 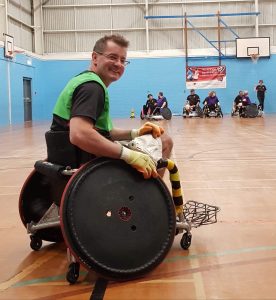 Today however, Mrs W is drinking well-deserved mint tea and I suspect a few things stronger in Marrakech with her girlfriends. She is celebrating a significant birthday (30th, but don’t let on), and frankly also getting a break from me and my constant disabled needs. She has earned it multiple (sclerosis) times over, after all.

And I’m at home with the hooligans. Loving that bit. But I’m missing a tournament. Missing a tournament! I’m gutted. Absolutely gutted. I’d have only been a bit-part player, weak in upper body strength as I am and inexperienced to boot. But to be part of a sports team again – and for it to be a contact sport – has had a sensational impact on me and for me.

Wheelchair Rugby and MS? Surely not!

Lots of my team-mates have total, beef-cake, slightly intimidating upper-body strength. Others have less but have played for ages and built up their strength and skills. And me, I have a progressive disease. Awful legs (not a problem with the rugby!), one bad arm, the other ok-ish. Not brilliant when trying to go in a straight line, to build up any head of steam or intercept a Speedy Gonzales. After all, it is the dodgems-stylie bashing that is a huge part of the fun. But one of the many things I love about this sport and the club I’m with, (Go Bournemouth Lions!), is it is totally non-judgemental. I have a role (to get in the way of the star players and be a general pain in the butt). And I can do that. A little better every week. 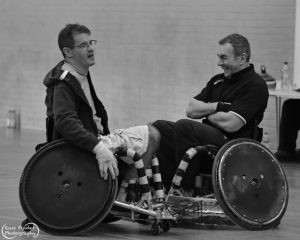 Training. Bash into everyone!

And even better? Half of the guys and gals I play with, I have no idea what illness or injury or condition they have. It doesn’t matter. We don’t talk about it. We laugh and we fight and we shout and we compete. Glorious, sweaty glorious!

A quick time-lapse of what goes on:

I’m not exaggerating. Not in the slightest. My poor upper body strength had deteriorated so much I no longer felt capable or confident enough to hand-control drive my car. Sure, I try to exercise and stretch daily, but not enough to offset the pesky progress of advanced and advancing Multiple Sclerosis… Now I get a three-hour workout every Sunday (boy it hurts!), and every single night, I lie in bed for 90 minutes binge-watching Netflix. With weights. Pumping iron! Woohoo. Slightly, ever so slowly, reversing some weaknesses and finding muscles I had forgotten about. ‘Housebound’ is, for now, a memory again. I drive again, no problem. Popped out on Friday for a coffee (on my own!) and bumped into this friendly celeb… Wouldn’t have happened without Wheelchair Rugby.

I get Wheelchair Rugby isn’t for everyone. But find something you love… 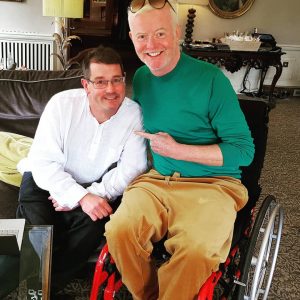 Chris Evans. See you at CarFest!